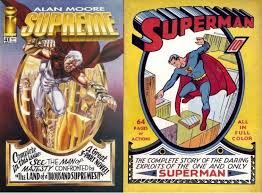 Brainstorm Comics and Gaming loves reminding or introducing lovers of the medium to stories they may have forgotten over the years or perhaps were never introduced to.  As a result of that, we’ve decided to do an (infrequent) post here and there dredging up some great pieces that aren’t mentioned as much as they probably should be.

Up first in this line of articles is Supreme by Alan Moore.  Rob Liefeld, creator of the character, realized it needed a facelift and called in one of the biggest, if not THE biggest, writer in the industry and Moore worked magic on the title.  This was a love letter to everything the writer loved about comics and the Silver Age in particular.

Yes, Supreme is an analog for Superman which causes the mind to instantly go to words like “ripoff” or “knockoff,” not flattering words at all, but that would be selling the title and what was accomplished short.  Besides, sometimes the knockoff is better than the original–just ask Oreo.  It was a critique on the industry, where it had gone, and an apology of sorts for his own influence on that state of affairs.  More than two decades prior to Doomsday Clock, Alan Moore was already questioning the impact of Watchmen and V for Vendetta.

Moore has a reputation for writing dark stories, but that isn’t the full scope of his writing.  Supreme showcases his true love of the industry, not just some small corner of it.  After this he followed it up with the ABC (America’s Best Comics) line which also demonstrated the full scale of his writing abilities–darker aspects with League of Extraordinary Gentlemen and Top Ten and lighter tones with Tomorrow Stories and Tom Strong.

And Joe Bennett, the artist on Immortal Hulk, kicked it off with issue 41.  So if you’re looking for a bit of nostalgia, mixed with a critique on the industry, along with a self-evalution of the impact Alan Moore had on the industry, and finally with a dash of comic book history, definitely check this out.  It’ll require some digging as the trade paperbacks are currently out of stock, but it’s worth the hunt.  In the meantime, check out this excellent blog about the series — http://forgottenawesome.blogspot.com/2017/07/moore-on-supreme-41-46.html

As always, thank you for reading.