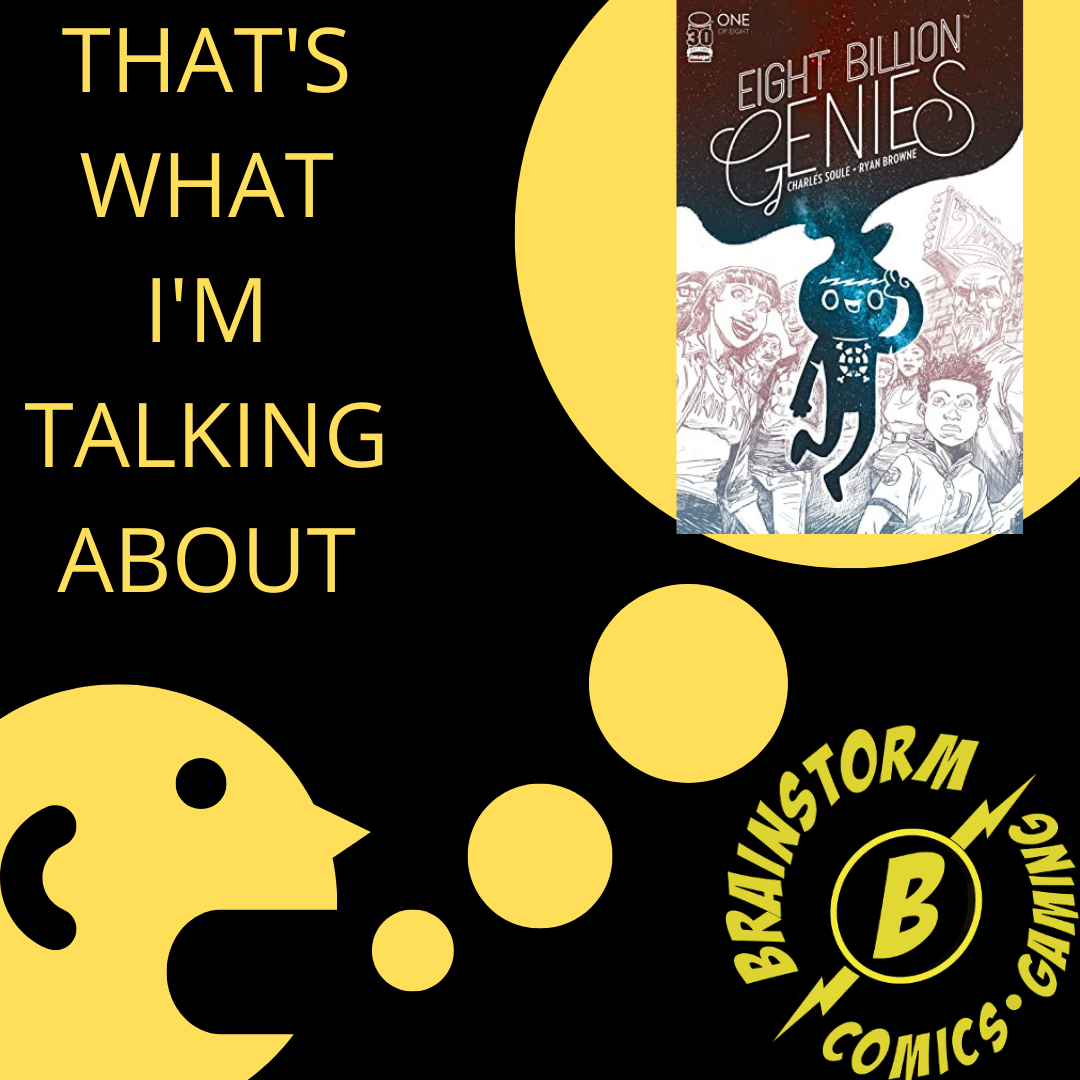 Welcome to our first post of a new series of articles we are calling That’s What I’m Talking About. Here we will delve into what the members of Brainstorm Comics and Gaming are most excited about or interested in. The lucky topic for this inaugural moment is Eight Billion Genies by Charles Soule and published by Image Comics. You can read the solicit at Previews World.

For full disclosure purposes, in my humble opinion, Charles Soule is one of the most criminally overlooked writers in comics. The man had a phenomenal run on the Man Without Fear Daredevil that established the new dynamic from which Chip Zdarksky (another favorite around here) launched his redefining run. It was during his run that Wilson Fisk took over as mayor of New York City. Star Wars fans are well familiar with him as he is turning in some fan-favorite pieces. He also puts out Curse Words and Undiscovered Country from Image Comics.

Whether you heard of him or have not heard of him, this is my guarantee–if you pick up a Charles Soule penned narrative (he has also written two novels you should check out), you will be entertained. One of the things you cannot teach for writing is finding a hook. Soule is the kind of talent who does that on a regular basis, which brings us to…….

While the name Charles Soule was enough to get me in the door, it was the hook that cemented the deal for me. In the story Eight Billion Genies, every person on earth is granted one wish. To idealists, this may seem like an equitable equation wherein everyone wins. Unfortunately, a utopia is not what Charles Soule has in store for the characters in this narrative.

What one has to realize with this hook is that basically everyone has been handed a nuclear weapon that can reshape the entire world. And when we say everyone, we mean everyone. Babies, teenagers, adults, the mentally ill, everyone gets one wish. So even an idle, unintentional wish–“I wish you were dead”–becomes a reality.

While the usual set-up for genies is one genie, one master, this story turns that paradigm on its head. Everyone has competing desires. Many are merely self-interested. There are many stories about those who win huge paydays in lotteries only to squander the money and even end up in a worse place than where they began. Most people want more, unhappy with what they have in life, except……

Will Williams, the owner of a bar in this story, is one of the main characters of Eight Billion Genies by Charles Soule. We immediately know something is special and different about him as he has some reveals about his past. For instance, he knows Mandarin which shocks all of those around him.

The most important thing we learn about this character, however, is that he is happy with his life. How do we learn that? Through his wish…..

…..of keeping his bar and everyone in his bar safe from anyone else’s wishes. At its core, that is the wisher asking only to hold on to what he already has and is probably one of the most responsible things a person could request. There is clearly more to this character and it’ll be interesting to see what his ties, if any, are to these genies.

Ryan Browne add much to the world by giving it a surrealistic look that is almost whimsical in its presentation. Without his artwork, the story would have definitely changed from what we were given. There are just certain artists that are made for certain pieces. For instance, I’ve never been a fan of Chris Bachalo’s artwork, but when he was put on Doctor Strange, I felt that it was a match made in heaven.

That’s the feeling I get from this first issue–Ryan Browne was made to draw Eight Billion Genies. Unlike Bachalo, I do feel that Browne’s art fits a wider variety of books, but this one would be all the poorer without his contributions. Browne and Charles Soule are a tremendous team that can’t be discounted.

THAT’S WHAT I’M TALKING ABOUT

So the reason Brainstorm Comics and Gaming is talking about Eight Billion Genies by Charles Soule and Ryan Browne is simple–great writer, great artist, and a tremendous hook with likable characters. If you haven’t had a chance to check it out, do yourself a favor and pick up the first issue. You’re in luck because the second issue also drops this week. Once you read it, it’ll be what you’re talking about as well!

Here is a link to a few pages from the story as well. Hopefully that taste will be enough to get you to explore the world of Eight Billion Genies.

Thank you for reading. Be sure to stop by our stores in Frederick and Walkersville, Maryland. We’ve been voted Best of Frederick for 9 years. Our Walkersville store has the best back issue selection available in the area with almost 100,000 individual issues to peruse. It’ll give you lots to talk about after you visit.