THAT’S WHAT I’M TALKING ABOUT! — MS MARVEL ON DISNEY+ PLUS 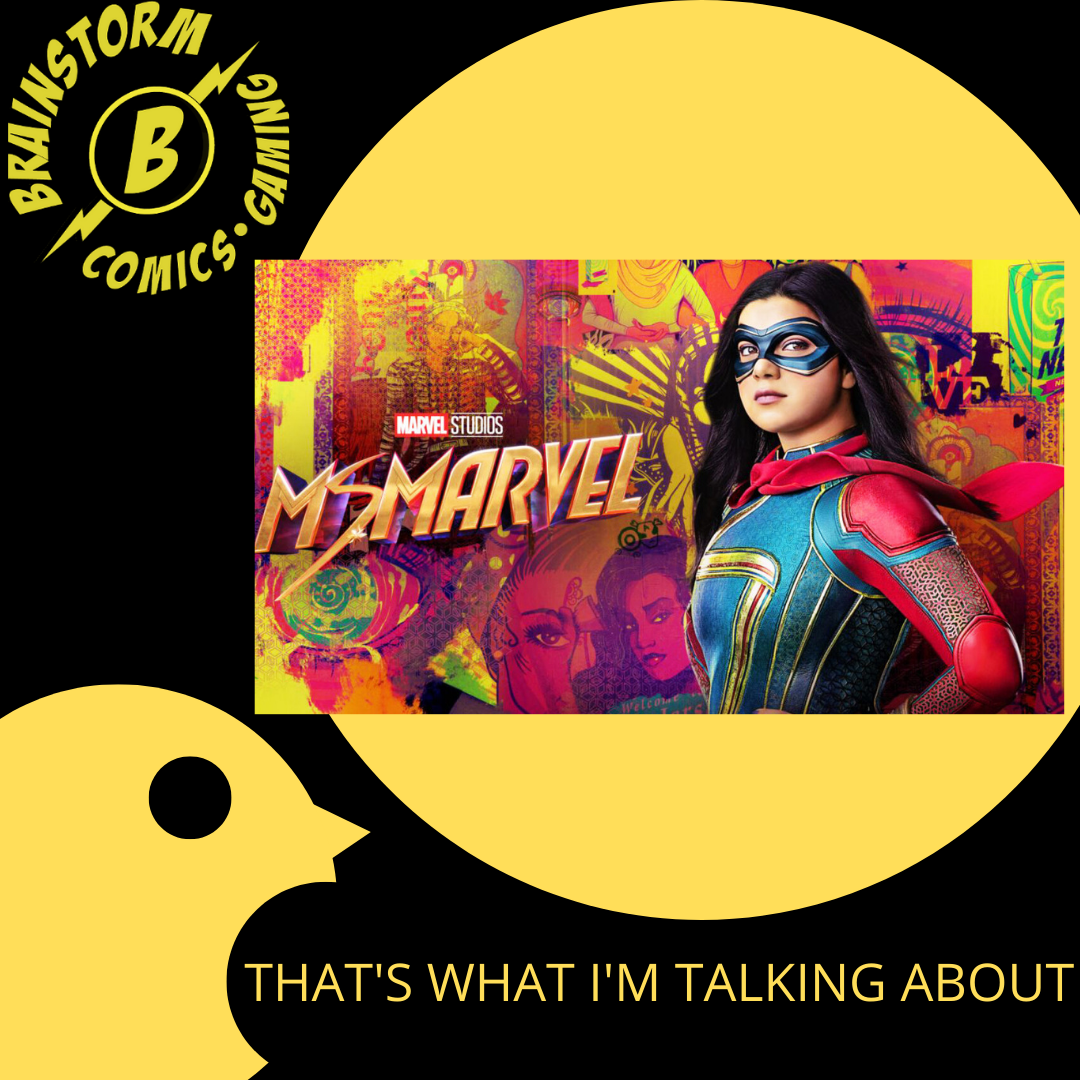 Welcome to our new installment of THAT’S WHAT I’M TALKING ABOUT, where the Brainstorm Comics and Gaming Crew focuses their attention on the great things in the comic and gaming industries. This week we turn our eyes to the new Disney+ Plus show Ms. Marvel. For me personally, Ms Marvel is the first Disney Plus show that I’m committing to. That isn’t to say they aren’t producing quality programming; it does have an optimistic tone that I’m looking for right now. I’m sure when she was created no one expected Ms Marvel to have her own show, yet her she is on Disney Plus. But after two episodes, how do we feel about the show? Let’s get into why this is show is something I’m talking about…..

Over the time of her existence, about one decade, Ms Marvel has asserted herself into the comics scene and refuses to be ignored. Thanks in large part to G. Willow Wilson’s deft ear for how teenagers feel and react to the world around them, the character is garnering an ever-growing fan-base that is excited to see how she grows with each problem that she encounters. Many within the industry have compared her to being this generation’s Peter Parker, speaking to the younger members of the audience while still having older fans nod their head in appreciation for the character Kamala is becoming.

For those of you who aren’t aware, the comic and the show do go their own ways. In the comic series, Kamala is an Inhuman (don’t judge it based on the television show entitled Inhumans. That would be a disservice to this character and to the Inhumans) which as of the first two episodes hasn’t been what we are to assume.

Some fans have been very critical of this change. For me, as someone who hasn’t read her comic series, it wasn’t a big deal. As with anything, I can see why purists would be angered or disappointed, but the feel of her character is authentic and from what I’ve heard very true to her comic book roots. If you have an engaging actor in the lead role, it’s easy to make people care, which brings me to…….

Certain people just have a strong screen presence that demand your attention. There are many shows that I watch where my attention is drawn between my phone, work for Brainstorm Comics and Gaming and the show I’m watching. It feels that many shows currently can be watched inactively without missing anything–but not this one. Currently there are only about four shows that command my undivided attention, so that is high praise.

While the story is engaging and well-written, without Vallani being a member of the cast, I’m not positive that would be the case. The way she presents the character in Disney Plus’ Ms Marvel feels authentic in a way that not many people can convey. When she does something worthy of praise, you want congratulate her and when she does something disappointing, you want to offer your solace and tell her it will get better. In that regard, she brings the feelings to the forefront in a manner that simply makes everything resonate with the viewer.

One of the aspects of Peter Parker that I feel many comic fans misinterpret is the fact he’s popular because his life isn’t easy. Even today’s writers often don’t understand that as an intrinsic part of his character. Other Marvel heroes, despite flaws they may have, have a much easier existence than Petey.

Thor is a god.

Peter Parker has much loss in his life and much adversity.

And this is Kamala Khan’s existence as well. Yes, she’s still a fun-loving teenager, but her life isn’t easy. She often feels awkward and out-of-place. While part of Kamala’s sentiment arises from being Pakistani-American and Muslim, it also derives from teenagers trying to find their place in the world at large. Ms Marvel on Disney Plus does a great job of getting this across through the story and acting.

All of this makes for some amazing……

For me, the moment Vellani and Kamala won me over, along with her friend Bruno played by Matt Lintz, was when they were reviewing her plan for how to escape the house to attend AvengersCon. Kamala believes she has this well-thought out, clever plan on how to go without being found out by her parents. Meanwhile, her friend boils down this complex plot to: “Your plan is to take the bus.” As teenagers, we all thought we had genius ideas which were really less brilliant than we thought; as a result, this moment felt perfect to me.

Leading up to her parents denying her request to attend AvengersCon, Kamala explains exactly what it was. Her parents were clearly out of touch with the hero culture that is being formed in the MCU, constantly describing it as a party. Again, as we get older, we become disconnected with younger generations and the trends they feel attracted to. Yes, it was played for laughs, but it didn’t feel disrespectful to the parents. That is one of the aspects I find most appealing about the show. Yes, the older and younger generations have different ideals, but it isn’t aggressively antagonistic.

Then there is the scene that as a father hurt the most. When her parents capitulate, trying to find a middle ground with their young daughter, they agree to let her go as long as her dad is the chaperone. As most teenagers would, Kamala immediately rebels against the idea, saying, no, you can’t go, immediately deflating her father’s happiness at having quality time with his child. Parents want their children to grow, become independent, but we also want to be a part of that maturing process, so it’s difficult when they push us away. At this moment, you feel badly for the dad, but you also see Kamala’s viewpoint.

It is moments like this that add authenticity to the superhero universe. Yes, these people have superpowers, but they are still people–whether that be teenagers or adults.

The show does two other things which I think speak volumes to how good it is. One, I had largely dismissed the comic series for being strictly for younger readers. After watching the show, I’m interested in at least giving it a chance to grab my attention. Television shows or movies that make you want to delve deeper into a character or story by going to the original source material are the benchmark for me. If I feel absolutely no desire to read the book afterwards, I often question the effectiveness of the on-screen effort.

The second thing it did is make me rethink Captain Marvel. A lot of Brie Larson’s press junkets were off-putting to me, being antagonistic instead of welcoming to a wider audience. But when you see the effect the character within the MCU had on her, Kamala makes you want to root for Captain Marvel as well. Ms Marvel makes me want to go back and watch the Captain Marvel movie; that’s a pretty strong endorsement in and of itself to Iman’s likability.

This series will not be everyone’s cup of tea, which I think is a given. However, I think many of the people bashing it are doing so without giving it a chance in the first place. One of the prominent complaints is it’s too slow and lacking in action. To me, these six episodes show Kamala finding her place in the world. Her enemy isn’t a super-villain yet; it’s being misunderstood and out of place. For a villain to have a big impact, the viewer or reader must have some sort of attachment to the character. That is what the narrative is building.

My hope is that you will give Ms Marvel on Disney Plus a chance, not allowing the the negative reviews to taint your opinion beforehand. If you do, you will be richly rewarded with engaging acting with moments that will make you smile.

And That’s What I’m Talking About.

Be sure to check out the previous installment of That’s What I’m Talking About.