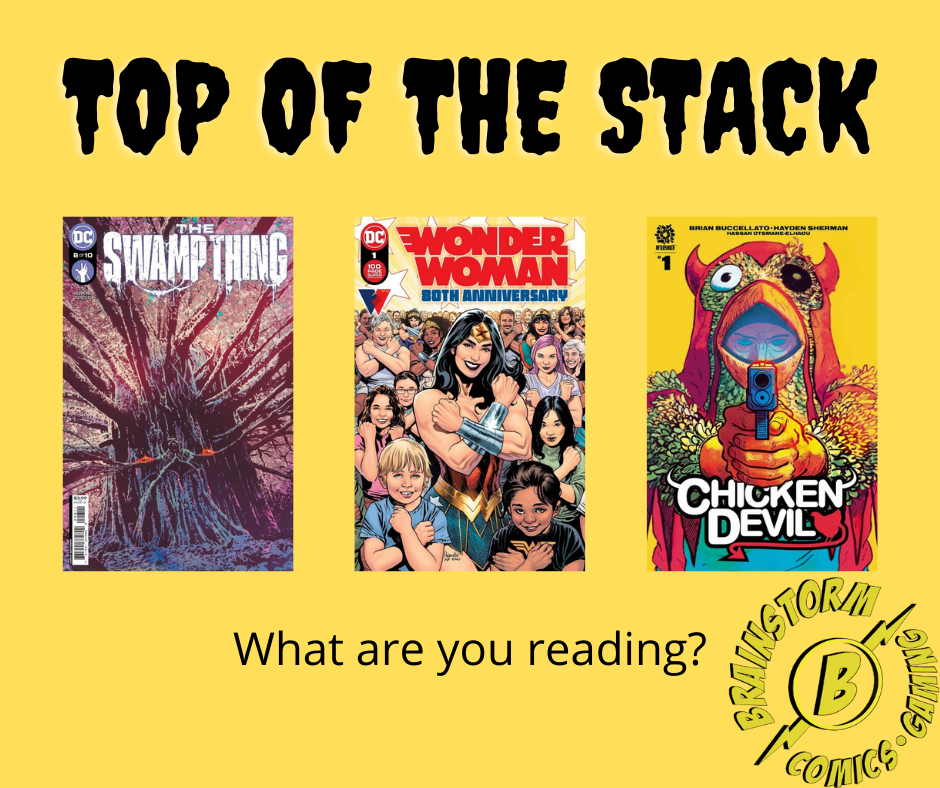 IN MY INFANCY, PART 3

A terrifying reunion! With Levi making his choice, the new avatar of the Green draws one step closer to escaping the clutches of the Suicide Squad! But is it already too late? Has the Squad bolstered themselves to an unstoppable end? Or will an unexpected guest help him to victory at a terrible cost?

Ram V has completely redefined Swamp Thing as a character and his take on the sacredness of the environment through The Green really has spoken to me in this run. As Swamp Thing comes to a close in the next couple of issues, I’m excited to see the finale of this amazing run.

Put on your tiaras and prepare your indestructible bracelets! DC is inviting you to join us for a one-of-a-kind special showcasing Wonder Woman’s past, present, and future to celebrate the legacy she has created and those she will continue to inspire with her adventures for years to come. This oversize super spectacular features work from some of the very best in the comic industry along with bright young stars ready to share the spotlight with Diana. You won’t want to miss these new stories that capture timeless messages of hope and empowerment presented together in this gorgeous keepsake issue!

Eighty years ago one of the greatest superheroes ever was created and she absolutely deserves this 100 page special. In this epic book, you get 10 original stories from superstar writers as well as some awesome variant covers (the Jen Bartel cover is gorgeous). If you are a Wonder Woman fan, this is a must read. However, if you like superheroes at all, I would still recommend you checking this out.

With the blood dry at Gotham’s fourth gruesome murder scene in as many weeks, Batman is stumped. The same

Mitchell Moss is about as regular as it gets. He’s married with two children, and co-owns a successful chain of Memphis Hot Chicken restaurants. It’s not the life that screams hero/vigilante…until he discovers that his business partner is in bed with the mob and owes them $2 million. Unfortunately, Mitch is ill-equipped to be a badass-he’s just a guy who makes really good chicken. Can he protect his family from cold-blooded gangsters? Absolutely not.But maybe the CHICKEN DEVIL can…

I describe this book as the moving Falling Down (a must watch for those of you who have never seen it) crossed with Kick-Ass. Mitch is an ordinary guy until his business partner smashes his life to pieces. Their company is $2 million in the hole to the mafia and the entrepreneur wants some semblance of his life back. This book is non-stop after the first few pages. Those readers who started collecting before the “writing for the trade” philosophy took hold will appreciate the speed of the action without sacrificing story or character building.