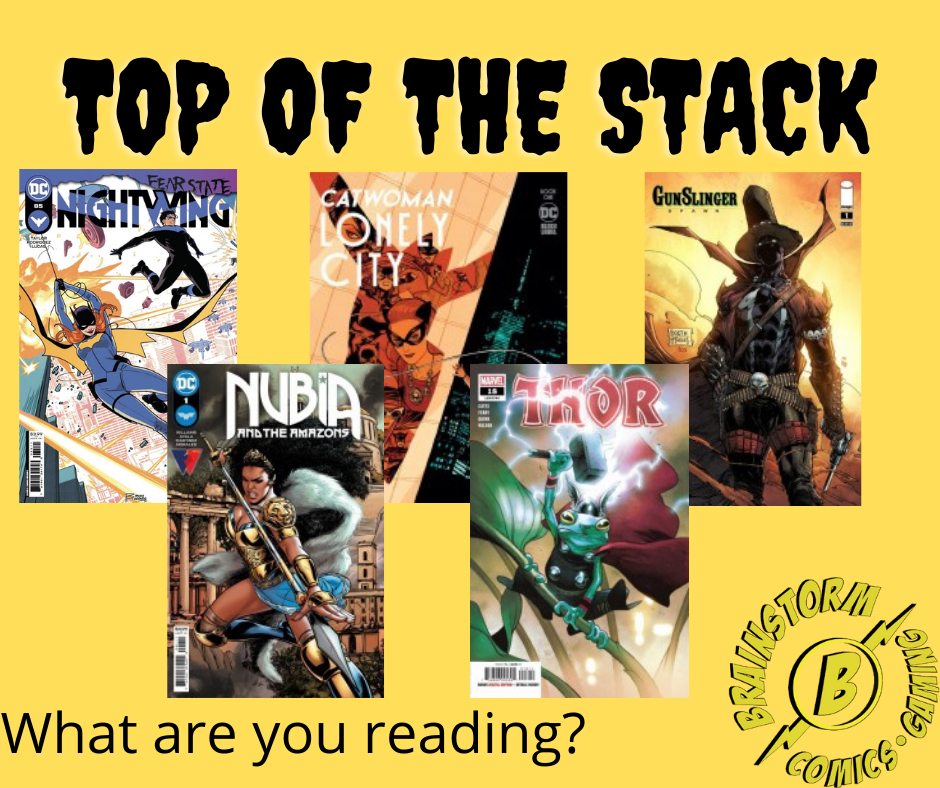 Babs takes the Anti-Oracle attack on her Oracle Network personally, and she suits up as Batgirl, accompanying Nightwing and Tim Drake to track down who is responsible. But with fear consuming the streets of Gotham, Batgirl and Nightwing accidentally get hit with something that reveals their deepest fears…and it involves each other.

Barbara suits up to be Batgirl with the possibility of it being her last time putting on the cowl as she figures out a way to stop the Anti-Oracle program from shutting down Gotham. With Nightwing and Robin in support, I’m expecting some amazing fight sequences and Bat-family content.

NUBIA AND THE AMAZONS #1

With the unexpected arrival of new Amazons, our hero is forced to reckon with her past and forge a new path forward for her sisters. Little does she know, a great evil grows beneath the island and it’s up to this former guardian of Doom’s Doorway to unite her tribe before paradise is lost forever!

This is a new book spinning out of Future State and Infinite Frontier. Nubia is a really cool character that is becoming the new queen of the Amazons while Hippolyta is busy off island. For long-time Wonder Woman fans, you will recognize Nubia. Got new fans, get ready for another awesome female hero with a much different personality than Diana. Also look to explore a lot more of Paradise Island, something that isn’t utilized enough in WW’s adventures.

Ten years ago, the massacre known as Fools’ Night claimed the lives of Batman, The Joker, Nightwing, and Commissioner Gordon…and sent Selina Kyle, the Catwoman, to prison. A decade later, Gotham has grown up—it’s put away costumed heroism and villainy as childish things. The new Gotham is cleaner, safer…and a lot less free, under the watchful eye of Mayor Harvey Dent and his Batcops. It’s into this new city that Selina Kyle returns, a changed woman…with her mind on that one last big score: the secrets hidden inside the Batcave! She doesn’t need the money—she just needs to know…who is “Orpheus?”

What will the effect of one bad day have on Selina? Not only that, but the amazing artwork by Cliff Chiang. I’ve been looking forward to this one since it was announced. I’m normally not much of a Batman fan, but I love small stories with big impacts on the characters.

I think this one will go down as an all-time classic.

MEET ASGARD’S NEW MASTER OF SPIES—THROG! After the events of “Revelations,” Thor has a top secret mission that only one trusted ally can carry out: Throg, the Frog of Thunder! Guest artist Pasqual Ferry makes a return trip to Asgard for this unique tale of otherworldly espionage, one that will have a profound impact on the future of the Marvel Universe!

Cates’ Thor run is a favorite read and always fun. That plus Throg front and center make this a must read.

Introducing the launch of the second new monthly title spinning out of the SPAWN UNIVERSE, with one of the most popular characters in the entire SPAWN mythology! This book contains three
separate GUNSLINGER stories, each taking a look at his journey through time – from the wild, wild west to the 21st century.

Will his 200-year-old past come back to haunt him as he navigates the strange world of 2021? Get ready for the past and present to collide in this new ongoing title!

The 2nd new monthly Spawn title in this recent Spawn expansion. I love Westerns and have a lot of nostalgia for the original Spawn. This is a just a very cool character getting their own title and should be a fun read.