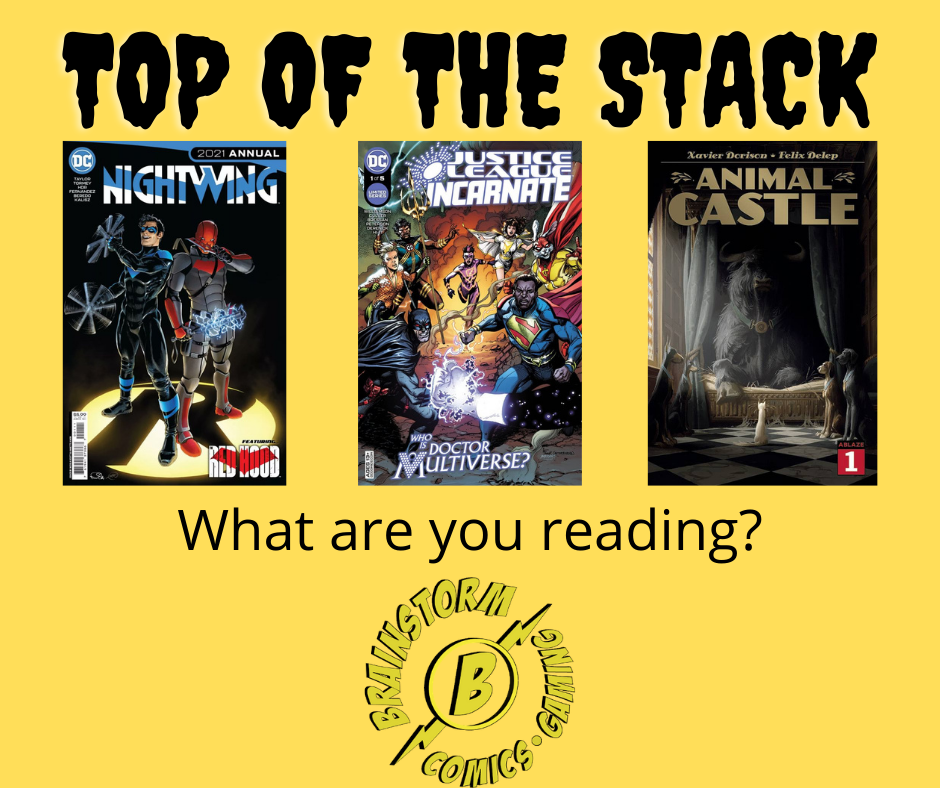 Dick Grayson and Jason Todd, the first Robins, both long ago stepped out of the shadow of the Bat and began walking very different paths on their respective journeys to become who they are today. But now their paths converge and these two brothers unite for one goal. With escrima stick and a crowbar combined, Nightwing and Red Hood are ready for anything…anything except what they have to face next! Don’t miss out on this explosive adventure!

Being a huge Red Hood fan, I’m looking forward to this issue the most as Jason plays a pivotal role. Teaming up with Nightwing to face a new threat together seems like a perfect pairing to me. I’m excited to see what Tom Taylor will do with Jason. The first look at the new Red Hood post Urban Legends will be interesting as he appears more throughout the other DC books. I hope this is a glimpse into a new Red Hood ongoing.

Following a devastating defeat at the hands of the one true Darkseid, the Superman of Earth-23 leads a team of superheroes from myriad worlds that includes Flashpoint Batman, China’s Flash from Earth-0, Captain Carrot from Earth-26, and the brand new superhero DR. MULTIVERSE from Earth-8 in a last ditch effort to stop the end of every possible universe as we know it!

Written by Joshua Williamson and Dennis Culver with first-issue art by Brandon Peterson and Andrei Berssan and a rotating cast of artists exploring the many different worlds of the DC Multiverse, this can’t-miss series is the next thrilling chapter in the Infinite Frontier saga!

Darkseid is back and so is Joshua Williamson to give us the next big event in the DC Universe. Infinite Frontier was a really great event that led to some awesome stories, in particular the stuff that Williamson has been behind. I am excited for this event because it is only 5 parts and doesn’t have a multitude of titles that it crosses over with. Straightforward stories are best for major events. DC is in great hands and I can’t wait to see what happens next!

On the Farm all animals were equal.

In the Castle some are more equal than others.

For fans of the bestselling Stray Dogs and the Eisner Award winning Beasts of Burden comes an animal fable at once familiar and surprising! You may think you know the story but set aside your assumptions, this animal uprising is unlike any you have read!

Nestled in the heart of a farm forgotten by men, the Animal Castle is ruled with an iron hoof by President Silvio. The bull and its dog militia savor their power, while the other animals are exhausted by work, until the arrival of the mysterious Azelard, a traveling rat who will teach them the secrets of civil disobedience.

Animal Farm has always been one of my favorite books with how even the best of intentions can lead to an unjust government. As a result, this solicitation naturally caught my eye. Add in a comparison to Stray Dogs along with Beasts of Burden and I’m there. After paging through the book, I’m also liking the art. If it lives up to the premise, this is going to be a special book.