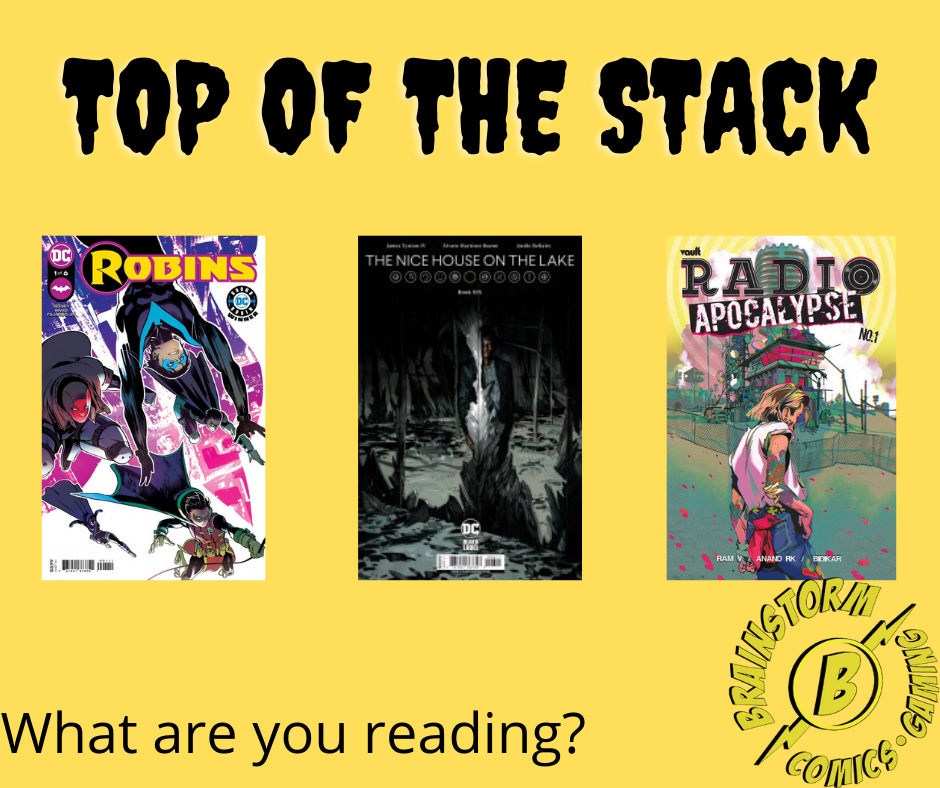 The five heroes to have donned the Robin cape and mask find themselves at a crossroads in their lives. Dick Grayson, Jason Todd, Tim Drake, Stephanie Brown, and Damian Wayne come together to discuss the big thing that binds them together: Was being Robin, and Batman’s sidekick, the best choice they could’ve made? But before they can get to the heart of the matter, they’re ambushed by an unknown assailant with a bone to pick with them. She claims to have been the first Robin, and she’s out to prove Batman should’ve never trained any of them. Winner of DC’s Round Robin tournament, as chosen by you, the readers!

This book is written by Tim Seeley who knows most of these characters inside and out. Five former Robins (Nightwing, Red Robin, Spoiler, Damien and (ed: the best Robin) Red Hood all gather together to ponder the question–was being Robin the right decision. However a new assailant claiming to be the first Robin is out to show them that the answer is a resounding “NO!” This mini-series was selected by fan vote. I voted for this one myself so I’m very excited to see how this plays out.

NICE HOUSE ON THE LAKE #6

The House has an eleventh guest. Reg is here—and that was never part of the plan. Or was it? Everything you know gets turned upside down in this issue…ending on a cliffhanger that will have to hold you until the House reopens in March 2022!

A new house guest shows up and it’s sure to upset the status quo in their safe haven away from the end of the world. This is the last issue as the title is taking a break until March. This has been a compelling read from issue #1 and keeps me reading as the story winds along, slowly uncovering some of the mystery of the nice house on the lake. Tynion remains on of my favorite current comic writers for good reason.

Long after the rock out of space struck the world and turned it all to dust, in Bakerstown stands the last Radio Station on the planet. Radio Apocalypse broadcasting into the unknown, a beacon in the dark for those who wander the lost places. Now change is coming to Bakerstown. Among the refugees flocking into an already precarious settlement, an orphan boy Rion, caught in an indiscretion, will twine his fate with the Radio Station. And in doing so, begin this mixtape of love and heartbreak and interminable hope. This soundtrack to the end of the world.

The world has coming to an end save for a radio station that shouts into the darkness, hoping to find someone to cling to. Written by rising star Ram V, it is always interesting to see what creators have to say without the editorial or market shackles of the big two. Don’t miss out on this one!